WEYERGANS DERMIO CARE® PLUS – THE POWER OF PLASMA AND COLOR LIGHT

Negative ions are great for your health. But what are they, and how do we get more of them?

The benefits of negative ions have been proven through countless research and scientific studies. Albert Einstein once said that the curative effects of the Davos mountain air were due to the air’s electricity…

Headaches, sleepiness, low attention spans and a general sense of feeling unwell are just some of the side effects of spending too long indoors. Scientists say it’s all about ions, or, more specifically, negative ions. Ions are charged particles in the air; some are charged negatively, and some are charged positively. Negative ions, put in non-scientific terms, are basically oxygen ions with an extra electron attached, produced through water molecules, which is why they are in such beautifully abundant supply near fresh, flowing water supplies such as rivers, streams, seas and waterfalls. This also explains how refreshing it can be to have a shower, swim or take a bath when we are feeling fatigued. But these negative ions, in plentiful supply in natural settings, are dangerously low in the average air-conditioned office, over-heated home or stuffy car. The air around waterfalls, for example, can contain anywhere from 30,000 to 100,000 negative ions per cm3, forests from 2000 to 3000 cm3. Compare this number to a stuffy car or office, which can contain zero to, at most, a few hundred per cm3.  For the human to undergo physiological processes in the body, there is a minimum limit of about 600 negative ions per cm3, and in order for maximum metabolic processes to take place there must be about 50,000 negative ions in one cm3.

It is proven that negative ions have no unwanted side effects or contraindications.

DERMIO CARE® PLUS – THE POWER OF PLASMA AND COLOR LIGHT 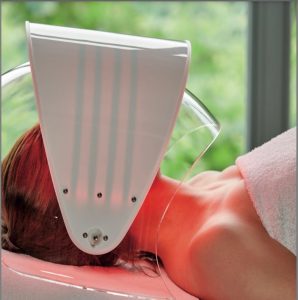 The Air we breathe contains are 21 % Oxygen (O2). Oxygen atoms are surrounded by positive and negative ions (electrical particles). The proportion of negative and positive ions  depends on the environment.

DERMIO CARE® PLUS device increases the number of negative ions in oxygen to over 5,000,000 per cm3 of breath. This turns the oxygen into plasma (similar to “electricity”). Increases the metabolism: in the skin and entire body. Plasma is surface-active and permeates matter (such as electricity, fire or heat).

Enhance the Dermionology with PhotoTherapy

Native cultures discovered that the color of plants often determined their healing qualities. Research with plants also indicates how colored light affects plant health. Dr. Niels Ryberg Finsen reported the successful use of red light to prevent scar formation from smallpox and was honored with a Nobel Prize in 1903 for his pioneering work with light therapy. Color therapy for health is gaining ground today as a result of the advent of Light Emitting Diodes (LEDs). Medical research sponsored by NASA, using both Red and Near Infrared (NIR) LEDs, expanded the awareness of, and use of, color therapy.

The following color spectrums are used depending on your needs, skin condition and treatment intention: